Patient Payment solutions is here to help your student loans by making your practice become more effective by collecting more money for what you already do. Here we see an extreme case of the current educational system in the article “Mike Meru Has $1 Million in Student Loans. How Did That Happen?” by Josh Mitchell. Here we have the case of an Orthodontist with an extreme debt load from Student Loans. In order to pay back sucha  debt he needs to have a practice that is thriving. One of the best ways to improve the ability of his practice to make money is to incorporate an automated approach into collecting patient portions. He knows as well as anyone that people’s finances are being stressed in many different ways. The ability to set people on an automated payment schedule is multiple magnitudes more effective then sending a bill and hoping it gets paid. Patient Payment Solutions is a viable way to help Mike make progress on his loans. Doctors are predisposed to these greater loan debts due to the time and cost of school. Lets look into some more facts of the upper education system around Mike.

Due to escalating tuition and easy credit, the U.S. has 101 people who owe at least $1 million in federal student loans, according to the Education Department. Five years ago, 14 people owed that much.

For graduate-school students especially, there is little incentive for universities to help put the brakes on big borrowing. The government essentially allows grad students to borrow any amount to cover tuition and living costs, with few guardrails on how the final sum will be repaid.

More than a third of borrowers from one of the government’s main graduate school lending programs have enrolled in some form of federal loan-forgiveness plan.

Since refinancing his debt with the federal government in 2015, lowering the rate to 7.25%, Mr. Meru’s balance has grown by $148,948. It will keep growing through the 25-year life of the repayment plan until it reaches $2 million. That sum will be forgiven and, at current tax rates, could cost Mr. Meru more than $700,000 in income tax payments. 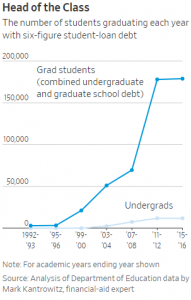